History of Black Trans Women in the HIV/AIDS Narrative

These stories give a face to HIV/AIDS. Normal everyday lives are changed in a matter of moments or a sequence of events. The cliché is that everything can change in a a second, but it's true. Decisions made can have profound effects on the long term. The raw emotion of these personal stories, some told with just their own webcams, shows a human aspect to the virus. Not only that, it shows the power of the human spirit. Rightfully, these women could've chosen to stay hidden and live their lives under the radar. By telling their stories, they are "outing" themselves all over again but it seems more important to tell people that though they may be sick, they are still living right now. It's empowering to hear that even through another obstacle, these women are still fighting the biggest fight of their lives-the fight for their lives.

Showcasing the lack of historical presence of African American transgender women from the HIV/AIDS pandemic narrative proved to be not only informative but lacking in some places. Many factors contribute to them being excluded from the conversations, even more so with the virus being stigmatized as an illness contracted and passed on by gay men, drug users and sex workers. Research has linked together transgender women (male to female) in with gay men. By grouping them together, there is lack of resources allocated to transgender women. In one study, using the internet was a way to broaden the spectrum of individuals surveyed about being HIV positive, transgender and their race. However, the study would again put transgender women in with groups that weren't their counterparts.

Resources are lacking for transgender women of any race, but particularly in areas of low economic status, where the population is majority African American. Healthcare centers and doctors aren't given enough training both medically and "bedside manner" to deal with the issues of being transgender. There is also lack of money which causes closures of healthcare providers. The bottom line is that transgender women, but especially African American transgender women haven't been given the spotlight. Having a virus such as HIV can also inhibit women from getting help and then there is more of a reason for lack of data. No one person is to blame, however it is up to future generations of both transgender HIV positive African American women and healthcare providers to ask the right questions and hopefully give the right answers. 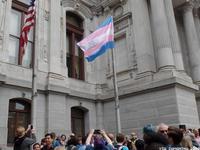 Disparaties in health care are a major factor in the absence African American transgender women's voice in the fight in and against HIV/AIDS. Lack of health care is also a contributing factor in higher risks of diagnosis as well as transmission due to failure of transgender women knowing their HIV/AIDS status.

How The System Has Failed Transgender Women

This is a video showing how the system has failed transgender women infected with HIV/AIDS.

REPORT: Women Who Are of Color, Trans and HIV-Positive Must Fight Overlapping Oppressions

A short article on the struggles of being a transgender woman of color with HIV.